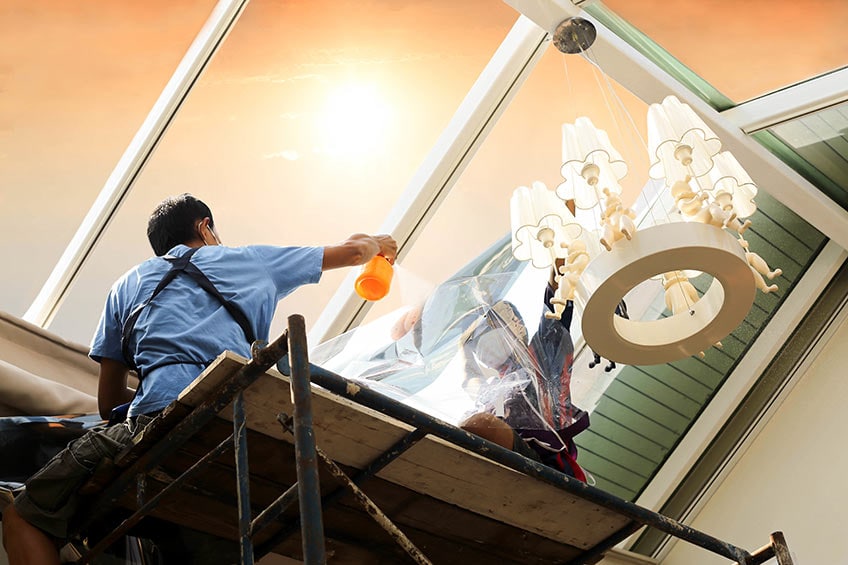 Our customers at PA Window Tint ask plenty of great questions. After all, there’s so much to learn about window film! But two of our most frequently asked questions are, “How is window film installed? And how is it removed?” In this post, we’ll walk you through the installation and removal process, including the timeframe and tips on maintaining your film. First up: how to install window film.

After you’ve chosen a window film, your PA Window Tint representative will schedule a time for installation. Upon arrival, your installation team will wash every window to ensure a clean slate. Any lint, dirt, or paint specs on the glass can cause your film to bubble, so a thorough window washing is vital.

Then, the team will measure and cut the film for each window. Once the film has been fitted, the release liner is removed, exposing the adhesive. To eliminate static created by pulling the adhesive liner, we spray our film with a special soap solution to prevent lint or dust from sticking on the film.

Team members will then wet the adhesive side of the film with our soap solution and stick it to the window. After the film is placed perfectly onto the window, we use squeegees to move the water near the edge of the film. Once we make a few final trims, we work the remaining water to the edge of the windows and wipe it with a towel. We do this until all bubbles in the film are pressed out. You will see a very small gap between the edge of the film and the window frame, but this is necessary to prevent your film from bubbling and cracking. Then, it’s on to the next window!

Window film installation is a delicate process, which is why it pays to have a team of experts install it for you. It is also important to not wash your windows for the first 30 days of installation. This gives the film the film time to cure to your window.

How long does the installation process take?

It depends. Homes with only 10-15 windows take about two hours, but we’ve completed entire school districts in a months time. Completion depends on the size of the windows, number of windows, and the type of window film applied. Thicker window films are more difficult to install and take more time. We strive to work with our customers and deliver results as quickly as possible. Please let your PA Window Tint representative know if you’re on a time crunch.

To remove window tinting, your team sprays a solution onto the film. We then use a scraper to gently remove each layer. As you know, glass is very fragile. So, it’s important to work swiftly, yet gently to not scratch or damage the glass. Depending on the size of the window and type of film being removed, this can take a few minutes… or a few hours.

Once the film has been removed, we use our solution and a squeegee to remove any residue. It’s important to use a lint-free towel to prevent dirt from collecting on the window. After a final wipe down, your windows are ready for new window film!

Many home or business owners try to install window film themselves. More often than not, DIY jobs result in frustration and wasted money. Invest in our premium 3M window film installations and see why thousands of customers across Pennsylvania choose PA Window Tint. Plus, every film is backed by a comprehensive warranty. Learn more and get your free quote today!

PA Window Tint Inc. began serving central Pennsylvania in 1993 and has since extended service to New York, Maryland, and New Jersey. Today, PA Window Tint is a 3M Prestige dealer, which identifies our company as a member of the elite network of dealers in the country which are entrusted with offering 3M’s highest quality products and providing impeccable installations. Give us a call at 1-800-978-9756 or fill out a form online.

How is Window Film Installed and Removed?